Texas Hold’em is a popular version of poker and is the main game that is played in tournaments. Back in the early 2000’s, ESPN began airing Hold’em tournaments on their stations. People immediately fell in love with the game. It quickly caught on and exploded in popularity throughout those years.

Since then, Texas Hold’em has become the most popular style of poker. It is played by people of all ages and it has shown no signs of slowing down any time soon. In this article, we will explain the rules and how to play Texas Hold’em in case you are new to the game and would like to learn.

The game is played with a standard 52 card deck. It can be played with up to 12 people at a time, although the recommended amount is in the 6-9 range per table. It is a game that you play against other players and not the “house” like you would with casino games.

Between each turn, the dealer discards the top card in the deck. This is to help prevent the possibility of the dealer cheating. This is not known to be a problem now, but it was an issue long ago. The dealer does not participate in the hand outside of dealing the cards on the table.

Chips are used in place of money. The players will start out with the same amount of chips at the beginning of the game. The chips will then be used to place bets throughout the hand and game or tournament.

The game begins with the dealer giving each player 2 cards face down. Once each player has their cards, they can look at them and decide whether or not they would like to play that hand. The last two people in the turn order are forced to put up a small and big blind. The big blind is the minimum bet that you are allowed to make. The small blind is half the amount of the big blind.

The round starts and each person must decide whether or not to fold, call the big blind (or the highest bet) or raise the bet. If there is a raise, the turn continues for each player until they have all had a chance to match the bet re-raise or fold.

After the first turn is complete, the dealer will flip over 3 cards face up. These are community cards which everyone that is still in the hand can use. Once the cards are revealed, they will go through another round of betting. At this point, you will again be able to match any bet, raise the bet higher or fold out of the hand.

Once that round of betting is finished, the dealer will flip a 4th community card. The table will go through a third round of betting. At this point, most of the players will be out of the hand.

Once this turn is finished, the dealer will flip a 5th community card. This is the last card that will be put into play for this hand. The last round of betting occurs and once both players call the bets, they will reveal their cards.

The object of Hold’em is to create the best possible 5 card hand that you can with any combination of the 7 that are available. You can even use the 5 community cards alone. The hand will continue until all but one player folds. If there are 2 or more players remaining in the hand after the last turn is complete, the cards are revealed and the player with the best hand wins. The winner of the hand will win all of the chips that have been put up for bet throughout the hand. This is called the “pot”. If there is a tie, the pot will be split between those players.

Hold’em is ideal for tournaments. You will often see tournaments consisting of thousands of players in a Hold’em event. In a typical tournament, each player will start with the same amount of chips. Players will be eliminated when they run out of chips. The blinds will be raised throughout a set interval of time. This is done to keep the pace and action going throughout the tournament.

These are just the basics of the game. The strategy of it is very complex and takes years to learn and master. 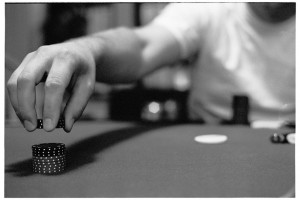